What is the Mass?

You may have wondered what the Mass is and why Catholics consider it important. We offer answers to some of those questions here.

Frequently Asked Questions about the Mass

Where does the Mass come from?
Has the Mass always been the same?
Why don’t all the Christian denominations celebrate Mass?
What is unique about the typical seats in a Catholic church?
Why do we stand, sit, and kneel at Mass?
Why do churches have statues and stained-glass windows depicting Jesus, Mary, and the Saints?
What is the significance of the various things seen in the sanctuary?
Is the presence of the Tabernacle important; and if so, where is it usually located and how do we acknowledge its presence?
What special things are included in the Liturgy during Holy Week and Easter?

Where does the Mass come from?

Jesus Christ, who is the God-Man, revealed the Mass at the Last Supper, before He died on the Cross, to redeem the world from sin and death. He instituted the Mass and the Eucharist to perpetuate the Sacrifice of the Cross- to be continued throughout the ages until the end of time, as He said, “Do this in remembrance of Me”

Has the Mass always been the same?

The major parts of the Mass have existed from the beginning, while the Church’s authority occasionally, as the Spirit guides, makes revisions to some of the prayers and minor parts of the Mass. The Mass is the center of the Church and the Christian life and the greatest part of God’s Revelation in Jesus Christ. Jesus teaches about the Mass and the Eucharist in chapter six of John’s Gospel, in the Last Supper Gospel accounts, and in Paul’s first Letter to the Corinthians (11:17-34). From the beginning, the Church has always celebrated the Mass and believed in the Real Presence of Christ in the Eucharist. The book of Acts speaks of the early Church dedicating itself to “the breaking of Bread” (Acts 2:42), which is historically synonymous with the offering of the Sacrifice of the Mass.

Why don’t all the Christian denominations celebrate Mass?

The divinely revealed truths of the Mass and the Eucharist have remained unchanged throughout human history, whether all have believed in them or not. From the beginning, all Christians celebrated in common the Mass and believed in the Eucharist, that is until Martin Luther, who had been a catholic priest for fifteen years, broke with the Catholic Church on October 31, 1517. By the year 1600, there were over two hundred Protestant interpretations of Christ’s words, “This is My Body… This is My Blood.” Even until today, Protestant Christians no longer believe in the Real Presence of Christ, although some believe in some form of presence in communion, nor celebrate the Sacrifice of the Mass with the Catholic Understanding of Transubstantiation.

Is unity is only possible through the Holy Eucharist? Yes, the Eucharist, called the Sacrament of Unity, is the most important means of hope for the restoration of all Christian unity, to reunite all Christians with the Church of Rome. It is important to note that we welcome our fellow Christians (as well as non-Christians) to the celebration of the Mass, but because Catholics believe the Eucharist is a sign of the reality of the oneness of faith, those not in full communion with the Catholic Church are ordinarily not admitted to receive Holy Communion.

What is unique about the typical seats in a Catholic church?

Most Catholic churches have pews, long benches where the people sit together during Mass, or chairs. Everyone faces the sanctuary, which contains the main altar and the ambo/pulpit, where priest presides. The pews usually have a kneeler, a soft padded fold-down bench, used for kneeling during prayer and various parts of the Mass.

Why do we stand, sit, and kneel at Mass?

We engage in different forms of posture at Mass to correspond with the various parts of the Mass. For example, we sit during the readings and homily because they are instructional, but stand during the proclamation of the Gospel since it is about the life and teachings of Jesus Christ. We also stand during the prayer parts, whether the ones said by the priests alone or by the congregation as a group. We kneel in adoration during the consecration when the bread and wine are changed into the Body and Blood of Christ and before and after receiving Christ in Holy Communion.

Why do churches have statues and stained-glass windows depicting Jesus, Mary, and the Saints?

Catholics understand and accept the reality of the entire communion of Saints. The Communion of Saints is made up of three groups in the one Family of God: the Church on earth, the souls in Purgatory and the Saints in Heaven. Catholics do not adore anyone except God and Him alone as the Trinity. But, Catholics understand that God has united the faithful and Saints in a family of love that is not divided by the reality of death. Saints are our friends and we can honor them with mosaics, paintings, icons, statues, and stained-glass windows to remind us of their holy lives and of their presence among us, praying for us, and of our friendship with them. As photographs remind us of our family and friends, so too do the statues and images of Saints. In venerating holy images, we are venerating the person whom the image represents.

What is the significance of the various things seen in the sanctuary?

Candles are present to give light, symbolize the rising of our prayers to God as the smoke rises and to remind us that Jesus is our Light and we are called to be His light to others. Candles are a sign of reverence and festiveness. The flowers show us the beauty of God’s creation, the representation of the liturgical season or feast, and our appreciation to God for His goodness. The credence table near the altar is present for the cruets that hold the water and wine, the basin and finger bowl, and the other items needed during the consecration. The Crucifix reminds us that every Mass is a representation of Christ’s Sacrifice. The Sanctuary Lamp when lit reminds us that Jesus is present in the Tabernacle.

Is the presence of the Tabernacle important; and if so, where is it usually located and how do we acknowledge its presence?

Yes, the Tabernacle is of great importance because it is the “house” of the Eucharist Who is Christ. The tabernacle must be present either in the sanctuary of the church, or in an attached chapel. The tabernacle is located in a place that is “truly noble, prominent, readily visible, beautifully decorated and suitable for prayer” Because Christ is truly present in the tabernacle, it is customary to genuflect in reverence toward the Tabernacle in adoration of the Blessed Sacrament when entering and leaving the church or chapel, and to direct our prayers toward Christ in the Tabernacle in general.

What special things are included in the Liturgy during Holy Week and Easter?

The period of Holy Week and the Triduum of Holy Thursday through Holy Saturday is a very special time. The Liturgy of the Mass has special place for blessed palm branches that resemble the scene of the triumphant entry of Christ into Jerusalem, the Cross that resembles the Crucifixion of Christ, Lilies that resemble the trumpets to announce the Resurrection, and perhaps a statue or depiction of the risen Lord or empty tomb. When present, these added symbols assist the faithful during Mass to reflect upon the central mystery of our Faith – the Passion, Death and Resurrection of Christ. 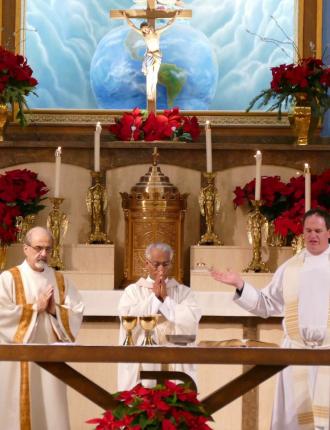