In 1904 Fr. Michael Gualco wrote to Bishop Thomas Grace and to the Apostolic Delegate Diomede Falconio expressing his concern about the spiritual care of Latin Catholics (primarily Italian and Portuguese) in the Sacramento Diocese. Following considerable discussion and consultation Bishop Grace decided to establish a national parish for the Latin peoples in Sacramento.

In 1905 Bishop Grace traveled to visit the Holy See in Rome along with Fr. Gualco. One of the purposes of this visit was to recruit Italian priests to come and serve in the Sacramento Diocese. Two priests and one seminarian were selected in August 1905. They were Fr. Temistocle Eugenio Mela D. D., Fr. Domenico Taverna and Mr. Benso Massimo. Fr. Mela was the founding Pastor of St. Mary’s. Fr. Taverna served in various places including Sutter Creek and, later, became the pastor of St. Mary’s. Mr. Massimo never served in the Sacramento Diocese; rather he finished his studies in London and came to serve the church in Texas.

Fr. Mela’s task was to begin a parish for Italians and Portuguese in Sacramento. Fr. Mela was born in Turin on January 9, 1873 one week after St.Therese of Lisieux was born in Alencon in Normandy. Turin was the city where St. John Bosco started his ministry among the boys who were the victims of poverty and turbulence of the industrial revolution. Piedmont was also a center of anti-Catholicism during Fr. Mela’s youth.

St. Stephen’s began when Mary Ellen Bowden bought the Crocker Home at the corner of 3rd and O Streets in Sacramento in 1900. She was instrumental in establishing a school, day care center and mission at this location. The people who served at St. Stephen’s tended to be working class members of ethnic communities other than Irish and German. At the time, Sacramento was a center of the fruit and vegetable canning industry that employed many immigrant women during the canning season. There was a need to have a safe place for children to be while their mothers worked. In 1906, Franciscan sisters staffed a school that primarily educated children of the immigrant community. For a time, Bishop Grace preferred not to have a separate parish at St. Stephen’s and it was staffed by priests from Blessed Sacrament Cathedral. However, there was a strong desire by the ethnic groups at St. Stephen’s to form their own national parishes. It was here that Fr. Mela began to form what was to become St. Mary’s parish.

Fr. Mela began to look for land and to secure money to build a church. In July 1906, he purchased land at 818 N Street for the original St. Mary’s Church. This first church was a small wooden building that, with various modifications, served the parish until the new church was built in East Sacramento after World War II. Originally, the structure was a barn and it was converted into the church. By the first Sunday in November 1906, mass was being offered at St. Mary’s Church and parishioners were registered.

Over these years, St. Mary’s would grow in spite of the struggles that the parish endured. The parish began with about 200 families. The center and summit of the spiritual life of any parish is to offer the Holy Sacrifice of the Mass.Early altar boys included Dominic Civitello, Frank Corsiglia and A. J. Nicoletti.

The reduction of the parish population resulting from the establishment of St. Elizabeth’s created financial problems for St. Mary’s. In addition, the location of the church at 818 N Street was far enough away from the center of the Italian population that Mass attendance suffered. Therefore,,Fr. Mela decided to move the church to the people. After consultation with Bishop Grace, Fr. Mela purchased property at 7th and T Streets, which is where Our Lady of Guadalupe Church is now located. The parish did not have the money to build a new structure at the 7th and T site. Fr. Mela decided to section the original building, move it to the new location and reassemble a modified structure. Peter Leoni was involved in moving the structure, constructing the steeple and hanging the bells.St Mary’s reopened on Sunday August 23rd. Mass attendance increased immediately and Fr. Mela had to consider adding new seating in the church. Sunday School attendance went up 400% in one week.

Fr. Mela had only four more years to serve at St. Mary’s. He died during the influenza pandemic on October 28, 1918 serving the people of the Parish. The memorial card for Fr. Mela’s funeral is a testimonial to his service calling him Victima Sacradoti Sui and Martyr to his Priestly Duty and also quotes the Gospel according to St. John, The good shepherd givith his life for his sheep. 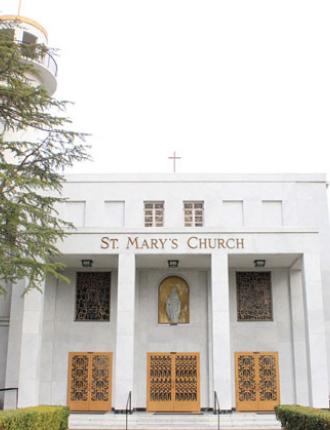